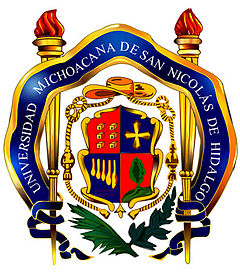 ERIP 2017, Universidad Michoacana San Nicolás de Hidalgo, Morelia, Michoacán, México CALL FOR PAPERS 5th Conference on Ethnicity, Race, and Indigenous Peoples in Latin America and the Caribbean Conference dates: October 4-6, 2017 ABOUT ERIP This conference is organized by ERIP, the LASA section on Ethnicity, Race, and Indigenous Peoples, in collaboration with Universidad Michoacana San Nicolás de Hidalgo and the Latin American and Caribbean Ethnic Studies journal (LACES). ERIP is committed to the promotion of research, teaching, and the exchange of ideas about all topics related to ethnicity, race, Indigenous peoples, Afrodescendants, and other ethnic groups in Latin America and the Caribbean. The ERIP 2017 Conference provides an opportunity for academics, graduate students, activists and practitioners in all the relevant disciplines to present panel and paper proposals on issues such as the rights of Indigenous and Afro-descendant peoples, social movements and politics, racism and discrimination, territoriality and autonomy, bilingual and intercultural education, health and traditional medicine, consuetudinary justice, race and ethnicity in performance, visual arts, literature and cultural studies, citizenship, multiculturalism, and ethnic and national identity among others. TRAVEL GRANTS FOR PARTICIPANTS FROM LATIN AMERICA AND THE CARIBBEAN ERIP, LACES and UMSNH have jointly established a Travel Grants fund to assist participants’ travel from Latin American and the Caribbean, on a competitive basis. Instructions for application coming soon at the ERIP webpage. Indigenous and Afro-descendant scholars are particularly encouraged to apply. MORELIA, MICHOACÁN Morelia is a city and municipality in the north central part of the state of Michoacán in central Mexico. The city is in the Guayangareo Valley and is the capital and largest city of the state. The main pre-Hispanic cultures here were the Purépecha and the Matlatzinca, but no major cities were founded in the valley during this time. The Spanish took control of the area in the 1520s. After the Mexican War of Independence, the city was renamed Morelia in honor of José María Morelos. In 1991, the city was declared a UNESCO World Heritage Site for its well-preserved colonial buildings and layout of the historic center (https://en.wikipedia.org/wiki/Morelia). UNIVERSIDAD MICHOACANA SAN NICOLÁS DE HIDALGO Universidad Michoacana de San Nicolás de Hidalgo is the oldest university in the Americas, and has its origins in the college founded in 1540 by Vasco de Quiroga in Pátzcuaro, the Colegio de San Nicolás Obispo. This school was originally founded to train priests and missionaries for work in Michoacán. The school gained a royal seal and patronage in 1543. At the beginning the 19th century, the school became one of New Spain’s main centers of learning and academia, producing scholars such as a Miguel Hidalgo y Costilla, José Ma. Morelos and others who would have a role in the upcoming Mexican War of Independence. After the Mexican Revolution, the school was reorganized and renamed to the Universidad Michocana de San Nicolás de Hidalgo. Nowadays, the Universidad Michoacana de San Nicolás de Hidalgo is the most important university in the state of Michoacán. It has been rated among the Top 10 public universities in Mexico. In 2011, according to the INEGI census, the university had 55,546 regular students (https://en.wikipedia.org/wiki/Morelia). SUBMISSION GUIDELINES Submit online at: ERIP 2017 Conference webpage (coming soon) Deadline: May 15, 2017 Presenters may propose individual papers and panels in English, Spanish or Portuguese. Proposals on all subjects related to the section’s mission and areas of interest in Latin American and Caribbean studies are welcome.  Panels • Panel title and abstract (no more than 150 words) • Presenters and discussant name, institutional affiliation, position/title • Individual paper titles and abstracts (no more than 150 words each) • Panel keywords (minimum 3)  Papers • Name, institutional affiliation, position/title • Individual paper title and abstract (no more than 150 words) •Paper keywords (minimum 3) ************* Carmen Martínez Novo, Ph.D. Associate Professor of Anthropology Chair of the Ethnicity, Race, and Indigenous Peoples Section of the Latin American Studies Association University of Kentucky 203 C Lafferty Hall Lexington, KY 40506-0024 Phone # 859-257-2684 Fax # 859-3231959 carmen.martinez@uky.edu